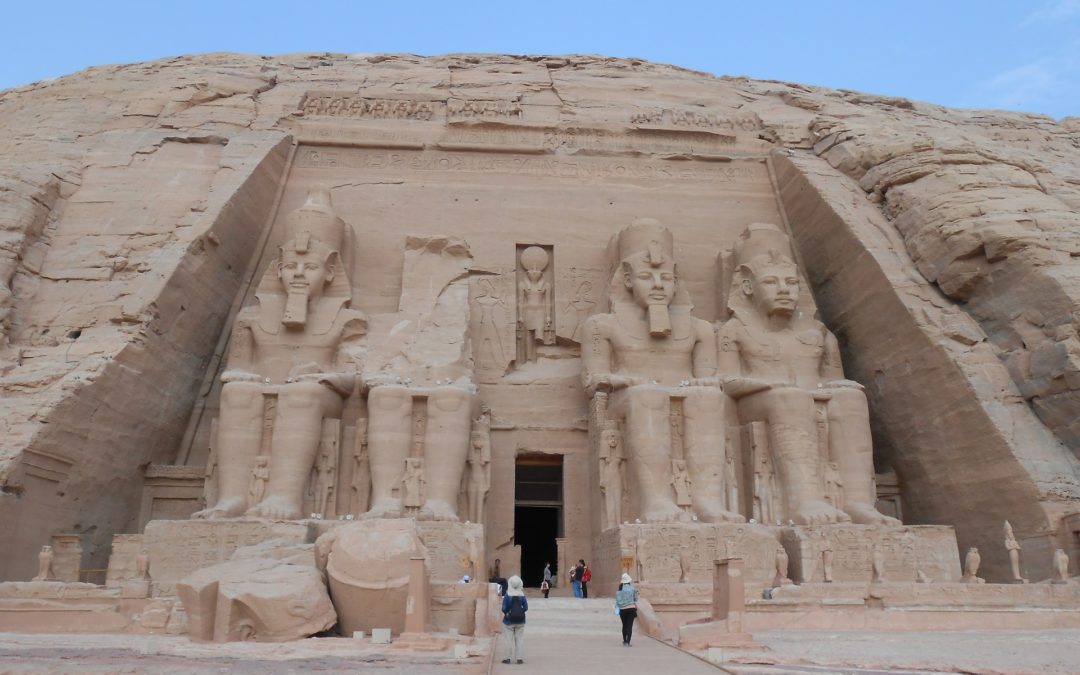 These ancient temples have a long and fascinating history and are one of the most intriguing and unforgettable attractions in Egypt.
In a village 280 km south of Aswan, you will find a complex of temples dedicated to the Pharaoh Ramses II. It is said that the imposing statues on the front of this temple were designed to scare potential enemies who were approaching Egypt’s southern region from the Nile. They still evoke awe in everyone who sets eyes on them.
While the pyramids of Giza are the most iconic artifacts from the world of the ancient Egyptians, these 3,000 year old temples are a close second. They are one of the most impressive structures of ancient Egypt – especially when you consider the story of how these temples were carefully disassembled, moved and reassembled in the place where they are today.
The temples of Abu Simbel are a must-see while you are in Egypt, so make sure you include a visit on your itinerary. Read more to learn more about the details of the temples, their history and the legendary Sunfeast.
The Amazing Abu Simbel Temple
The Amazing Abu Simbel Temple
What to Expect

The entrance to this incredible site is striking – it is crowned by a carving of Ramses worshipping the god Re-Horakhty with the head of a falcon (who is also known as Ra). The four seated statues at the entrance depict this legendary ruler wearing a headdress, kilt, double crown and a false beard. His young and handsome face is finely carved in the stone – he was only in his 20s when construction on the temple began. The depiction is incredible in it’s scale – his lips are more than a meter across.
Around the legs of these four colossal statues are several smaller statues that depict the relatives of the pharaoh. This includes the pharaoh’s mother, his sons and daughters and his wife Nefertari. You will also see depictions of 22 baboons – their cry was believed to welcome the rising sun and they are depicted with their hands raised high.
As you walk through the seven meter high doorway into the interior of the temple, you will immediately feel the temperature difference as you escape from the blazing Egyptian sun. The inner rooms of the temples have the same triangular layout that most ancient Egyptian temples are known to follow – with rooms that decrease in size from the entrance to the sanctuary. Within the temple you will find depictions of Ramses II as the god Osiris. The atrium also has empty storerooms on the sides.
Pay close attention while exploring the temples – you will see that every inch of this incredible building has been crafted with amazing attention to detail.

The statue of Ramses II at the Great Temple of Abu Simbel. The temples were dismantled and relocated in 1968 when Aswan dam was built.
The History of Abu Simbel

These stunning structures took twenty years to build – construction began in 1244 BC and was finished around 1224 BC.
Eventually, the temples stopped being used and fell to ruin, covered with desert sand over the years. By the 6th century, the Great Temple was nearly completely buried in the sand and was forgotten about until it was rediscovered in the early 19th century.
It was in 1813 that Abu Simbel was discovered by a scholar from Switzerland, Johann Ludwig Burckhardt. He was on his way out of the area when he saw the front of the great temple – the colossal statues had been buried up to their necks in sand. He enlisted the help of his friend Giovanni Belzoni from Italy to complete the excavation. However, although they tried they were unable to dig out the entrance of the temple.
Belzoni came back in 1817 with the English Egyptologist William John Bankes. He was able to reveal the entrance and enter the base of the monument. So, he took every last bit of treasure and any other item of value with him… and left.
It is believed that Abu Simbel was not the name given to the temples when they were built, but rather the name of a young boy who had originally guided the Swiss scholar Burckhardt to the site. Historians do not know what the ancient Egyptians would have called the complex as this information has been lost in time.
Temple in Abu Simbel and tourists, Egypt
Temple in Abu Simbel and tourists, Egypt
Moving the Temples: An Enormous Project

King Ramses II earned the title of “the Great Pharaoh” mostly because he built many colossal statues and enormous monuments. In fact, more buildings were erected during his rule than any other Egyptian king. As well as building the temple here at Abu Simbel he also had many other Egyptian landmarks constructed such as the Temple at Karnak and the mortuary temple Ramesseum.
You can see these impressive buildings and much more on any luxury Egypt tours. Ramses built monuments to himself in every major city in Egypt – from north to south.
Ramses would even take monuments constructed by previous pharaohs and destroy them, then use the materials to build his own projects. For example, some of the blocks from Chefren’s pyramid at Giza were taken to help build the base of Ptah’s Great Temple in Memphis. He was obsessed with building monuments to represent his glory and although his efforts were fueled by vanity, they did result in some magnificent structures that we can still admire today.
Ramesses II Statue at Karnak Temple, Luxor, Egypt
Ramesses II Statue at Karnak Temple, Luxor, Egypt
Ramses chose to build the temples on this site because it was already considered sacred to Hathor, who was the goddess of joy, motherhood and love. By building this religious site, his divinity was strengthened in the eyes of his ancient Egyptian followers.
Constructing this temple convinced the people of Egypt that Ramses II was akin to a god. He had his name emblazoned on everything so that for years to come his memory and his name would live on forever. Building a temple to himself as a god would not have been accepted among the priest class in Thebes, which is why Abu Simbel was constructed 300 miles to the south for this purpose.
As well as honoring himself, Ramses was also trying to intimidate the Nubians – Egypt’s neighbours as well as force his religion on them. He also meant the Abu Simbel temple to be a monument commemorating his victory at the battle of Kadesh.
King Ramses II and Nefertari: The Small Temple for the Queen

King Ramses II built the Small Temple at Abu Simbel as a monument to his beautiful and much loved queen Nefertari. It is located just north of the main temple and it is smaller in size.
This was only the second time in history that an ancient Egyptian temple was built in honour of a queen (the first was when Akhenaten) dedicated a temple to his great royal wife, Nefertiti. These are some of the most impressive monuments in the country and they are a must-see on any of the best Egypt tours.
Nefertari’s name meant “beautiful companion” and she is one of the most famous Egyptian queens in history. She was an unusual woman for her time – she was educated and able to read and write hieroglyphics which was uncommon for females at the time. She was a highly skilled diplomat, communicating with other prominent members of royalty at the time.
Ramses II loved her immensely. In this temple, the state of Nefertari was carved the same size as the Pharaoh himself. This is significant, as it is the first time that a statue of a Pharaoh’s wife was made to be the same size as her husband – usually the statues of wives never stood any higher than the Pharoah’s knees.
By making their statues the same size, Ramses II was stating that he loved and respected Nefertari as his equal. Nefertari is also depicted within the Great Temple – she is one of the women of the royal family who is shown beside the colossal statues of Ramesses II that stand before the temple.
Queen Nefertari
Queen Nefertari
As you walk through the interior of the Small Temple, you will find another room decorated with scenes of Nefertari and Ramses II interacting with various gods. On the back wall of the inner room, you can see Nefertari being crowned by Hathor and Isis.
Not only are these paintings incredibly beautiful, but they also tell us a lot about what the Egyptians believed about the Afterlife and Judgement Day.
What is the Sun Feast?

When the Great Temple was constructed, it was built precisely with the position of the sun in mind. On two days of the year, February 22nd and October 22nd, the sun will line up perfectly with the temple and sunlight will penetrate 55 meters into the inner rooms of the temple – bathing the statues on the back wall in bright light. The only statue that isn’t illuminated by the sun is Ptah, the god of the Underworld.
There is no doubt that Ramses designed the temple in this way in order to further promote the idea that he was equal to the gods. His depiction is one of the sculptures that is illuminated, along with statues of Ra and Amun. It is likely that these two dates every year were associated with a special ceremony, ritual or festival.
The Sun Feast in Abu Simbel Temple
The Sun Feast in Abu Simbel Temple
People from all over the world gather at the temple during these dates in order to witness this incredible sight. Special trips to see this event are some of the most exciting and sought after escorted tours Egypt has to offer.
Why were these dates significant? No one knows for sure, but it is thought that they represent Ramses II’s coronation date and his birthday. There is no direct evidence to support this, but it is logical to assume that the temple would have been designed so that these dates had some relation to a great event.
Visiting the Abu Simbel Temple

These days the temples are one of the most visited attractions on Egypt tours and they even feature a sound and light show with headphones provided to hear the audio commentary.
Thousands of visitors come to see the temples every day, usually arriving via plane to the field that was constructed near the temples. Tourists also arrive via bus by guarded convoys departing from the nearby city of Aswan.
However, many choose to fly to avoid the long and hot bus journey over the desert sands. It is a little bit out of the way, but it’s impressive size and sheer beauty make it worth the extra journey.
Our Guide Sam in Abu Simbel Temple
Our Guide Sam in Abu Simbel Temple
The best time to arrive at the temples is as early as possible, as you will beat the heat of the middle of the day and will also avoid the large crowds of tourists. Most tourists will arrive by mid-morning, but the temples will open at 5am so it is possible to visit them in the cool hours just after sunrise to admire the way they look in the early morning light.
No cameras are allowed within the interior of the structures, for fear of damage and fading to the delicate carvings and paintings.